Our students participated in the 30th Belgrade Marathon

Jubilee 30th Belgrade Marathon was held on Saturday, April 22 and it gathered a record of 7,000 competitors in the marathon and half marathon from 60 countries, and about 20,000 people in the traditional “Fun Run”. As a part of Belgrade Marathon, it was held the Serbian Championship in half-marathon relay events for students. Our faculty took a part in that Championship and had teams in mens and mixed competition. 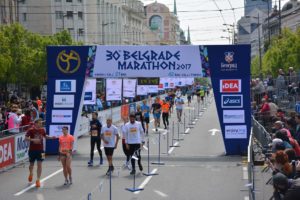 Ognjen Stojanović, Radmila Đurović, Vuk Krunić and Ivana Srbinoski were the part of medley relay. They took second place, after the students of Faculty of Medicine, and they crossed the section of 21.1 km for 1:34:40.
At 10 am at the intersection of Bulevar Kralja Aleksandra and Resavska street has also started men’s relay of Faculty of sport, which was consisting of Branko Lazović, Miloš Tanović, Vladimir Danko and Peter Benderać. Last update was Petar Benderać who has crossed the target and provided his team 4th place with a time 1:32:34.
Jubilee 30th Belgrade Marathon was held under the name „Marathon connects“, and Belgrade on Saturday was the real capital of the world of athletics. A large number of guests from Serbia and abroad contributed to the amazing atmosphere and positive energy that carries the spirit of the marathon. The sign for the start of the race this year gave the legendary aces, promoters at previous years, Rosa Mota, Galina Čistjakova, Bob Beamon, Lasse Viren, Mike Powell, Kevin Young and Javier Sotomajer.
On this occasion, we congratulate our brilliant students on the great success that they have made on the 30th Belgrade Marathon.