Miodrag Miško Ražnatović, a lawyer and one of the most respected and the most influential basketball agents in Europe during the past decade, has been the visiting lecturer at the Faculty of Sport today. He has had experience for more than 20 years in representing players worldwide and he founded the Beobasket agency in 1995. In addition, he is the FIBA licensed agent. 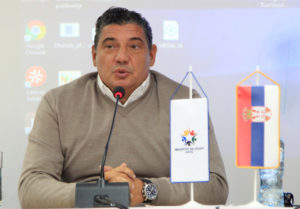 Since its founding the Faculty of Sport aspires to provide its students to hear immediate experiences of the most successful Serbian trainers, managers and journalists, therefore concerning this lecture such tradition has continued.

In his lecture Ražnatović has described the path of an agent from the moment when the scouts recognize the talent of a fourteen-year-old boy till the conclusion of significant contracts.

– It is very important to evaluate attitudes occasionally. Thus, my considerations from 1995 have changed completely today. Once it was considered that players should be followed from the age of 16 – 17 and everything before that was considered even rude. However, this age limit has lowered nowadays and children are followed from the age of 13 – 14. Also, I thought that players till the age of 23 should have played in Europe, and after several seasons in the EuroLeague went to the NBA to look for their chance there. This attitude has changed as well, and I think now that players should go to the NBA at the age of 19, and even if they need two years to adapt to the new system, it won’t be the waste of time. The best example for that is Jokić, and besides him Luwawu and Zubac – Ražnatović said. 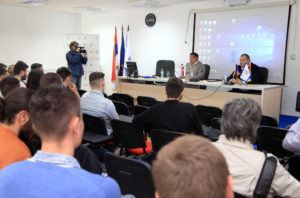 In order to succeed in the world of sport, particularly in the positions of significant sports officials and managers, education is necessary.

– For the purpose of succeeding in a managerial job, apart from consistency, systematicness is highly significant and that is acquired by studying at the faculty. By attending lectures and drilling units and by spending nights while studying, the personality is formed, work habits and responsibility are developed that those without such practice couldn’t develop – Ražnatović stressed.

It was followed by the torrent of questions that the curious students of our faculty poured upon the visiting lecturer. One of the standout mantras of this lecture is ‘Nobody drafts what the players are nowadays, all people draft the vision of what that player could become.’